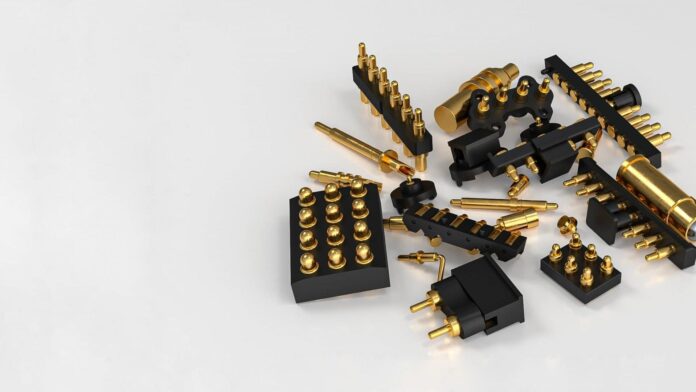 Pogo pin is known to be a device that can be used to establish a connection between two circuit boards that are printed in the device that we use daily. Pogo pin comprises 3 major parts to function which include; a spring, a needle shaft, and a needle tube.

Pogo pins are highly functional in mobile phones and other electronic devices for communication purposes. The most adequate pogo pins are the high current pogo pins as they decrease the weight and volume of the connector to which the probe is applied. Pogo pins come in different shapes and sizes to perform their task at an optimum level.

There are several types of pogo pins. Following are some of them discussed in detail

This is the first and the foremost type of pogo pin. TIP pogo pin has a straight pin with the tail of the plunger. There is no migration strategy in the PCB board of the TIP pogo pin, hence it has a great placing and position.

This type of pogo pin consists of a two-way head so that designers and engineers can work with choices of adjustments on board-to-board connections. It is a special type of connector. A double-head pogo pin also gives space flexibility for board-to-board two-way connectivity.

The solder cup pogo pin is a flexible and easily handled type of pogo pin. It is easy to weld a solder pogo pin and is attached to the end of the cables. This is the least complicated pogo pin among all the types.

The screw thread is the type of pogo pin with the most specifications among all the pogo pins. It is the most smartest of the pogo pins which helps as a connector as well as the mounting part of the device.

SMT/SMD is the most stable type of pogo pin. It has a flat surface which makes the work of engineers easy with the essence of flexible welding. Flexible welding increases the demand for SMT/SMD pogo pins.

Pogo pins are highly beneficial for your devices due to several reasons. The first and foremost advantage of pogo pins is that they are less time-consuming in comparison to the normal traditional connectors. Moreover, the anti-corrosion system in pogo pins is said to be a good option. And it helps in the supply of a larger amount of current. Hence, makes it the best option for your device.

Pogo pins are made up of gold plating which increases the functionality of anti-corrosion attributes and technical performance. It is an important piece of device used in several departments and areas of our lives, such as; mobile phones, connectivity devices, medical services, etc.

Hope this article was of help as pogo pins are to your phones. For more information about the pogo pins and their functions keep visiting our website. Happy reading!

Reasons To Opt. For Commercial Tablets

How to Avoid Getting Banned when Buying rs3 Gold

Learning How To Buy FIFA Coins The Right Way